THE GREEN CAB LOT is located in the heart of the city’s gritty Mission District. The nearby blocks are filled with grocery/liquor/lotto shops; tire and auto parts dealers; divey bars, trendy cafes, dirt-cheap taquerias, upscale restaurants; some of the city’s more affordable housing; a huge, brick complex (formerly the city’s armory) where quadruple-x-rated adult entertainment films are produced; and, at 826 Valencia, a “writing center/pirate store,” the give-something-back project of local writing/publishing legend Dave Eggers.

Our lot is less than one block from the Sixteenth Street BART station plaza, which at all hours of the day (photo) is occupied by people chanting Krishna or loudspeakering Jesus 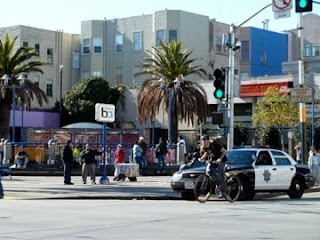 or proclaiming the end of the world or begging spare change or selling popsicles from a cart or eyeing your backpack or sitting on the curb, hands cuffed behind, while a couple of cops dubiously study IDs. A few battered storefronts away is a used-bicycle shop where recently, the day after my bike was stolen, I stopped by on an (incorrect) hunch that I might be able to repurchase it there.


At Sixteenth and South Van Ness, Green Cab rents fifteen parking spots from a smog check/oil change/garage business which until a few years ago was the site of a full service gas station. Our parking spots are located off toone side of the property, clustered around a tall canopy that used to shelter a gas pump island. The whole enterprise is encircled by a tall chain link fence, with a heavy gate that must be rolled back and forth whenever we drivers leave or arrive. During our comings and goings we are always careful to keep an eye on the local populace. Usually it’s just folks heading to or from BART, but there are always a fair number of loiterers or homeless people pushing carts and muttering quietly or sometimes very loudly to themselves.


THIS MORNING I ARRIVE IN THE PREDAWN DARKNESS, get out of my car, unlock the gate, roll it back, drive my car into the lot and park in an empty space next to cab #914 -- my cab. I punch my waybill into the timeclock (5:04 AM), transfer my supplies (coffee cup, coin jar, clipboard, cross-street directory, etc.) from my personal car into my cab, roll my cab over to the vacuum machine and clean out the front and back (last week, while I was vacuuming under the front seat, the hose nozzle became clogged with…US currency...five bucks!).

This morning I’m the only person in the lot, and, as I finish bending down into the backseat with the vacuum nozzle, I stand up and notice that 1) I have accidentally left the gate to the lot wide open, and 2) a homeless-looking man has stopped on the sidewalk just outside the gate and is studying me. When I look at him he turns and walks slowly away, toward BART, but he keeps glancing back at me. No one’s in sight but the two of us. Diagonally across the street is a well-lit Union 76 gas station, but I’m probably 70 yards from the cashier’s door. I decide to roll the gate shut, but as soon as I move toward it the homeless man reverses his direction and heads right back my way. Just as things are about to get interesting, he stops -- we’re about fifteen feet apart now -- and speaks up: “It was you.” His face opens into a smile. “You was the one in the commercial -- wasn’t you?”


BUT OTHERWISE, my fifteen grainy minutes of fame seem to have drained right out of the hourglass. For the first couple of weeks after the Ad began to air, I was approached at least a dozen times each shift by people who remarked on it. But these things have a shelf life, and the ad agency must have cut back on the number of times it's airing (or maybe they stopped airing it completely?), and poof -- the number of mentions dropped to five or six per shift, and then earlier this week, straight to zero. As I go through my shift now, the whole thing can seem as though it never happened.

Television is supreme. We will watch, we will focus on, whatever the networks, the advertisers, and the ad agencies put in front of our eyeballs, and when those people decide it’s time to move on, we move like a flock, one big hypnotized flock. What power! And there’s no denying it: While that big monster spotlight was shining on me, it certainly was intoxicating. Two weeks ago, my friend and fellow Green Cab driver Mort Weinstein, who a few years ago had his own quarter-hour of fame when he organized Recording Artists Against Drunk Driving, warned me, “Enjoy it, but be careful -- don’t get hooked. It’s heroin.”


IT’S 3 PM, AND I’M ALL THE WAY OUT AT OCEAN BEACH. I need to gas up and get the cab back to the yard for the 4 PM driver. I haven’t given away a free ride today, but no big deal -- no law says that I have to, and every other year or so a shift comes along where a free ride just doesn't work out. I can always give away two tomorrow.

Today, however, is still possible. I’m at least twenty minutes from the yard, and maybe someone will flag me along the way or maybe I’ll spot someone in a bus zone. I cruise down Lincoln for forty blocks, looking, and then on a hunch I turn up Ninth Avenue to Irving, where a young man’s hand shoots into the air the instant he sees me. He’s headed to Potrero Hill, several blocks past the yard -- for me, absolutely perfect.

He says he’s thrilled to see me, and I say I’m thrilled to see him. He says he’s only been standing there for a couple of minutes, but those minutes have not been hopeful ones -- Ninth and Irving isn’t a prime cab-catching location, and it’s the start of the Friday afternoon rush hour and all -- and then suddenly, here I am…

He says he is not familiar with cabulous, but yes he does have an iphone, and within two minutes he has downloaded the free cabulous app and now he chuckles while watching, on his iphone’s screen, the one little blue dot representing his phone and the other little green dot representing Green Cab #914, rolling down Oak Street as cozily as if they’re married.

And then: “You know, I’m in the market for one of these Priuses. Do you like yours?”

Me: “I absolutely love it.” I tell him about running the numbers a year after giving up my Crown Victoria for a Prius; as a result of my switch, at least 5,000 gallons of gasoline did not get burned that year!

My fare has a new job, and a new hour-long commute for which he needs a new car. “I’ve narrowed my choice down to either the Prius or the Ford Explorer,” he says. “Last week I saw this great ad for Prius on tv, and it’s tipped me that way.”

Me: “Tell me about that ad if you will.”

He: “Well, it was just one guy, a cab driver. In fact, he was a Green Cab driver, and he was talking about how much he loved his Prius.”

I take off my baseball cap, turn around, grin: “Did he look anything like me?”

He goes on to say that it was a very effective ad, in fact, the “best car commercial I've ever seen." (This is the third time I’ve heard this comment, and twice it came from strangers.) I say thank you, and tell him that I haven’t yet seen it -- I could watch it on youtube, anytime, but I’m actually hoping to stumble upon it in the normal course of my life. He asks how the ad came about, and I give him the short version. He says some more very complimentary things, and volunteers that -- having already been tipped toward the Prius, and having now wound up in my cab -- he doesn’t see how he could possibly buy anything but the Prius.

“Oh god…,” I say, and I’m virtually moaning. “Oh god, I wish this ride were being taped. I wish the ad agency, I wish Toyota, could hear exactly what you’ve just said.”

I tell him about this blog. He tells me his name is Blake (Blake Kemp, I think), and I tell Blake Kemp there’s not a snowflake’s chance in hell that he can pay me for his ride today.


(NOTE: After work I find seven envelopes in my mailbox. One of them contains a congratulatory letter from, and an invitation to join, the Screen Actors Guild. The other six contain checks from the ad agency totalling $2,551.71)