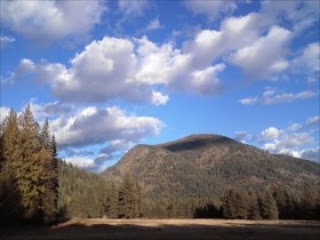 and chopped down trees and built a log cabin but two decades before I even thought about doing that Kerouac spent a summer in a lookout tower on Desolation Peak in Washington state and if he had real good Forest Service binoculars he might’ve probably looked over into Idaho down at the meadow (both photos at right) where I built my cabin twenty years before I built it. Right now it’s too early to call my friend Blake in Corvallis or I would call him because just a couple of 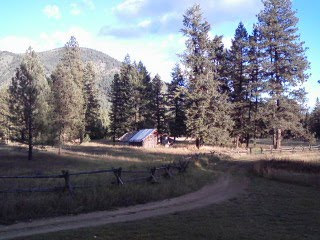 weeks ago in Yosemite Blake and I were sitting naked in the sun next to an icy snowmelt river we’d both just climbed out of and he pointed up to a far-off mountain and said, “That’s the mountain Kerouac and Gary Snyder climbed in Dharma Bums -- you should read it -- you might like it.” So as much as I fancy I’m not as lazy a writer as Kerouac and as much as I envy his fame and success mostly what I feel on this too-early-to-call-Blake-morning is just embarrassment. Every thought I ever thought, every place I’ve ever been, every thing I’ve ever done it’s all a repeat. And now outfront of Noah’s Bagels on Fillmore Street I read Kerouac’s last ten pages and think What a fraud I am! It’s clear like a prison searchlight pointing right in my eyes every thought I’ve ever thought has already been thought by at least a billion people, every place I’ve ever been has already been trampled over by at least a billion billion more and then written about by at least half a billion billion of them. Every hope and dream I’ve ever hoped and dreamed has already been endlessly hoped and endlessly dreamed, and every ache and pain I’ve ever ached and pained has already been ached and pained by a zillion zillion others. How did I ever delude myself that it was possible I might ever do something original? Save the world? Make some difference? Write a book that’ll always be remembered? All I’m going to do on this plane of existence is breathe some as-yet-uncertain number of breaths and then move on maybe to some other plane or to nowhere and nothing at all. I think again about calling Blake, but it’s too early, he’s got his family house full of kids and who really wants a call from some cab driver in San Francisco talking this kind of crap at 7:30 on any morning? But it’s definitely embarrassing reading all these stories about hitchhiking and traveling and Kerouac’s sophomoric enlightenment musings, just like mine, but maybe better. I’m so upset, really, that I switch on my gas-electric-hybrid engine and glide Green Cab #914 up Fillmore Street thinking I might just swing down through the Marina, maybe catch an airport fare off the radio, and if I don’t catch an airport fare 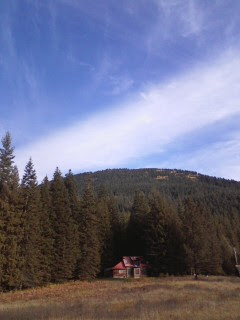 I might just head on out to the Golden Gate Bridge and if I feel like it I might just keep on driving across and go on up to Desolation Peak or over to Idaho to visit my old cabin (right), but if I don’t feel like it I might just park on this side of the bridge and either get out and walk to the middle the way I sometimes do on slow Sunday mornings or else I’ll just sit there and look up at the bridge and dictate some of these Jack Kerouac thoughts of mine to my laptop. But when I hit the crest of Pacific Heights and I’m looking out between the Broadway mansions and down the ski jump steep part of Fillmore Street I see that even though the mist and fog have burned off from the whole city now, the Bridge itself is still smothered by a big tube of fog that’s pouring right through the Golden Gate and screaming across the Bay like one of those freight trains Kerouac hopped and which I never did, it’s big and fat and white and up above there’s nothing but more big and fat and blue and underneath there’s a bright stripe of the Marina green but all I can see of the bridge is the very tops of the two red towers sticking up out of Kerouac’s creamy freight train. If I park by the bridge I’ll just be sitting in fog. I look up the hill at Nancy Pelosi’s house which sometimes I drive past so I can count how many newspapers are scattered on her front sidewalk when she’s in DC or so I can look and see if the Secret Service is sitting out front inside one of their tinted black SUVs. 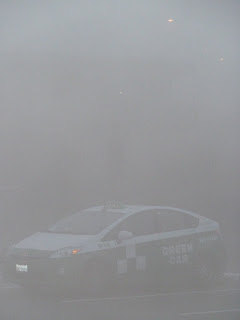 But my heart’s not in any of that and I turn back toward downtown and drive through the Tenderloin until I’m flagged by a woman on Taylor at Geary right beside the Hilton Towers and first blink I think prostitute. She’s wearing a catchy little black and white schoolgirl thing that also kind of looks like a sailor’s outfit and she’s got a tough little face but she’s not wearing any makeup like most hookers I see so maybe she isn’t one after all. She says she needs to go to Seventh and Howard and when I start with my questions she tells me she was “born right up there at UCSF and raised right here in San Francisco” and the farthest away she has ever traveled is Arizona. She asks me how long I’ve been driving a cab and I give her my line about “I just started…twenty-five years ago” and she laughs and asks don’t I ever get tired of all the drunks and I say no not really. I don’t say Are you drunk and I don’t say Are you a prostitute and I don’t tell her that I’m so fucking sick-tired of my goddam arms hurting that I could cry and then we’re on Sixth Street, the old skid row Kerouac wrote about in Dharma Bums, I think he bought donuts there sometime when he was drunk one night, and suddenly I hear my little tough-faced schoolgirl’s voice coming from way down low like she’s maybe on the floor of my cab “I didn’t know you were going to go down Sixth Street!” I turn around and look and see that she has slid down as far as she can, she’s flat on her back on the backseat looking up at me with her no-makeup face like she’s laying down in some pine needle soft clearing in the woods or something but the important thing is that her head is not sticking up above the window frame any more so no one on Sixth Street can see her going past in a cab so now I know she really is a hooker and she’s hiding from her hooker friends or her pimp or whoever but she doesn’t want me to know so she tells me a different story. She says, “I don’t like Sixth Street” and I say “Oh really” and she says “Some of the people here are crazy -- some girl tried to jump me here last night for no reason at all” and I say “Oh really” and she says, “No reason at all -- women in San Francisco are unpredictable and scandalous.” And I say, “Oh, say that again. Please.” And she says it again, “Women in San Francisco are unpredictable and scandalous.” We only have another two blocks to Seventh and Howard and the whole time I’m repeating it to myself, and I’m thinking Jesus Christ my arms ache and at the same time I’m telling myself don’t forget her words unpredictable and scandalous, those are original words, I’ve been alive for fifty-nine years and eleven days and my arms have been aching for seven or eight years already, and in all that time I’ve never heard those same words put together in that particular order.