IT’S PARTICULARLY SLOW this drizzly morning. I stamp my waybill in the time clock at 6:11 A.M., but it isn’t until 8:21 A.M. that I find my first ride, a radio call, a young man from Presidio Heights going to meet a friend at Four-Barrel Coffee, the hot new roastery over on Valencia Street -- $11.65, plus a nice $3.35 tip. But just five minutes later, here’s my second ride -- two young guys flagging me at Eddy and Van Ness. As they settle in, I’m hit by a big reek of strong pot.

They both chuckle. They tell me they’re heading over to the Castro District.

I ask, “So what does the rest of your day hold?”

The younger one: “Mostly that.” 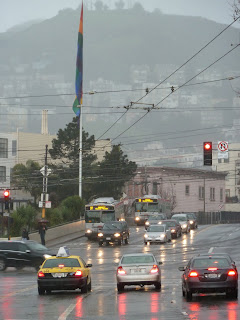 The younger one, I soon learn, is twenty-three. He arrived here as a refugee from Russia when he was just five years old. He’s never been back, but he remembers lots of things about Russia. He tells the story of how his father, a doctor, managed to scrape together the money and arrange the visas to allow the family to leave Russia, and he perks up when I tell him I rode the Trans-Siberian Railroad from Beijing to Berlin a couple of years before he was born...

At least once a day in my cab I find myself boasting that, “I have visited all fifty of the United States, and have circled the world with my backpack four times...”

As we’re rolling up Market Street, and just as we’ve come within sight of the enormous Castro District rainbow flag (it’s limp this morning, perhaps exhausted by an over-exuberant Saturday night), I notice that I have forgotten to turn on the meter. In a perfect world there would be no meters. We would each simply do whatever it is we do to benefit the human race and/or the planet. We would not look for a return, for a reward, for payment. I like to imagine a Man 100 Miles Up, looking down on all of us, just observing. From that distance he couldn’t see money. He would merely discern people moving around, doing stuff to help others.

I scan my body, and Body issues a quick verdict: Free Ride.