LATE LAST MONTH -- way back during that distant, almost-forgotten, long-ago era before the San Francisco Giants beat the Texas Rangers four-games-to-one in the World Series and became the world champions of baseball! -- I gave a free ride to a fresh young Asian woman who called from a house on a narrow two-block alley on Russian Hill. And now, just ten days later, I’m back, summoned by a radio order from that very same address.

It’s a small, two-story, hundred-year old house squeezed into a wall-to-wall row of others much like it. This one was long ago divided into two rental units, each with its own separate buzzer. I press the appropriate buzzer and wait in the doorway, thinking: Will she even remember the free ride…? Will she expect another…?

But when the door opens, instead of the fresh young Asian woman I’m anticipating, a fresh young blond woman emerges. She’s heading to the Castro District, and tells me, “I usually take the bus, but this morning I chose to sleep in. Today is my birthday.”

I coo and wish her a wonderful day, and think, Birthday... Probably a free ride after all…

She runs a reading program at a public elementary school, coordinating sixty “community volunteers” who once a week read aloud, one-on-one, to fifty-five students who struggle with reading. Each session lasts approximately forty-five minutes. “It’s an AmeriCorps program,” she says. “There are similar programs in about forty schools around the Bay Area.”

I tell her that on the bulletin board in front of the public school down the street from my house in Oakland, I have noticed just such a program advertised, and in the back of my mind for quite a while now I’ve been telling myself that this would be a sensible place for me to volunteer. My fare encourages me wholeheartedly.

Me: “What did you study in school?”

She laughs. “Human biology -- and then I started focusing on the brain.”

“Where did you go to school?”

Me: “Well, that is one high-powered address back there -- your roommate went to Northwestern, right?”

She, briefly puzzled, but deciphering quickly: “Oh no -- the two girls downstairs went to Northwestern. My own buzzer doesn’t always work, but theirs always does, and I can easily hear it up in my apartment. So this morning, since I’d already heard them both leave for work, I gave their address to the dispatcher. It’s more reliable this way.” The sort of very clear answer -- and the sort of creative solution -- we’d expect from a Stanford grad.

Me: “So who did you root for in the World Series?”

“Oh the Giants, of course! And wasn’t that fun?”


THE GIANTS HAVE BEEN WORLD CHAMPS FOR ALL OF THREE AND A HALF DAYS NOW. Cleanup crews have barely had time to sweep up the tons of confetti that fluttered down onto Montgomery Street during Wednesday’s victory parade, which was attended by hundreds of thousands of people -- some reports say a million! 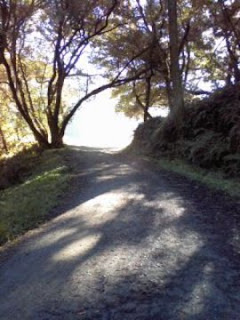 of people, screaming as loudly as any of them and waving something orange over my head. My wife and daughter and I watched the final pitch in our living room on Monday night, and then I drove alone in to San Francisco and joined tens of thousands of high-fiving, beach-ball punching, electric-smiling fans outside the ballpark. But on Wednesday I just didn't have anything left. I skipped the parade and instead drove to Point Reyes (photo, right), hiked out to Arch Rock [below], and took a short cold swim in the Pacific.) 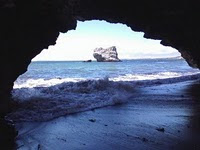 The entire region is still stunned, still pinching itself. I sense that we’re only now -- and perhaps just this morning -- starting to catch our breath, preparing to think about moving on. But a thrill as electric as this thrill -- the almost-complete surprise of seeing “a bunch of castoffs, misfits, and mercenaries” win a World Series, the Giants’ first World Series victory since the team moved to San Francisco fifty-two years ago -- does not pass through the collective psyche of a populace overnight. I believe that the feeling in the streets, on the airwaves, and in my backseat so far this morning must be the feeling that swept this same city during the now-fabled Sixties. I suspect that this stunned, warm, borderline-psychotropic feeling will last a while -- it will morph and twist and will seem to disappear and then it will flare back up again and again, and this will continue to some degree for the next couple of years. It’s going to take a while for us to get over, to get used to, this one…

Birthday girl asks: “Where are you from?”

My Stanford fare is still with me: “How did you wind up in San Francisco?”


IN 1974 I SPENT TWO MONTHS traveling from Athens to Afghanistan and back with an elite basketball player friend of mine, Bird Nietmann. Bird was one of just sixty-four players invited to try out for the 1972 US Olympic basketball team, and in 1974 we had to time our Afghanistan venture to take place during the off season of the French professional leagues, where Bird was being paid a (to me) fabulous amount of money to score a (to anyone) fabulous number of points.

Along our journey -- on trains, on buses, in cheap hotels -- we found ourselves in conversations with hundreds of other travelers. Our compatriots painted exquisitely detailed portraits of their hometowns, their schools, their parents and siblings and grandparents, their pets, boyfriends and girlfriends, their health, and the jobs they’d worked (or the trust funds they’d tapped into) to pay for their travels. But as I recall, only once did anyone ask the basic questions that would provoke Bird into telling his unusual story. (And I don’t remember anyone ever soliciting the details of my ordinary life.) What this says about human nature, I’m not quite sure, but I do find it at least…well, fascinating.

By my own rough estimate, somewhere between half and two-thirds of my cab fares never ask a single question about my life. This doesn’t much bother me (it’s my cab and I still get to talk plenty -- if you’ve ever caught me right after my morning or afternoon coffee, you’ve probably regretted it), but I do find this lack of curiosity puzzling. In general, people seem flattered, even sort of thrilled, when I pepper them with my questions. Most often they will, with enthusiasm, sketch out their entire life histories, and some will share shockingly intimate details of their lives. But many of these very same people express no interest in hearing anything whatsoever about me.

I notice that among the people I’m most comfortable with -- my friends -- it seems that there is always a rough parity in the amounts of time we each spend talking to and listening to the other. It doesn’t have to be an exact fifty-fifty split (and there are certainly times when something dramatic will require one or the other of us to do ninety-five percent of the talking during a particular get-together), but my experience is that if the airtime ratio regularly drifts beyond, say, sixty-forty, the friendship will not survive.

If, over lunch or dinner or out on a hike, I find myself talking too much, I believe I’m quick to create a conversational opening for my companion(s). I’m hardly unique -- many people are the same way. Often, while I’m watching the face of a friend who is sharing a story, I will see something uncomfortable flash across his or her face, and will know that they will soon be soliciting something -- almost anything -- from me.


“HOW DID YOU WIND UP IN SAN FRANCISCO?” the Stanford-grad with the birthday has asked me. I meet a fair number of Stanford students (and alums and faculty) in my cab and I am always impressed. Many college graduates will look back on their school years as perhaps the best years of their lives. And often they will do this with a wistful sense: Too bad I didn’t realize at the time just how good I had it. But anyone currently attending Stanford seems to already appreciate their good fortune, seems to understand that he or she is currently in the midst of a peak experience. They’re not going to have to let several years pass so that they can look back, rosily, on their college days. They’re into it all right Now. In my next life I plan to go to Stanford. Had I applied during this lifetime, I would most definitely have not been accepted. Next lifetime, I’m be ready.

I tell my fare about having visited all fifty of the States, about having circled the world with my backpack four times, etc.

She: “What were your favorite places?”

Me: “Whenever I get that question, I always start with India…”

She: “India-- I was just there last summer!” She tells me she worked in an orphanage in Chennai for six weeks, during which she simultaneously contracted both dengue fever and some other grizzly-sounding disease of which I have never heard and of which I want no part. My fare looks and sounds and claims to be fully recovered, and maintains that even the illnesses didn’t ruin her experience. “I loved India,” she says. “It is so different...”

No one ever forgets their time in India, where today eight hundred million people are living on less than two dollars a day and doing whatever they can to get by. I say, “Imagine the things we’d be seeing out the window right now if this taxi were in India…”

For the duration of the ride, we share India stories, pretty much fifty-fifty. At the end she briefly protests my free ride offer, but I don’t take it seriously. I’ve noticed that people’s resistance to my free rides -- and to Life itself -- is always lower on their birthdays.